Doll speeds away in a Porsche and Klopp arrives? 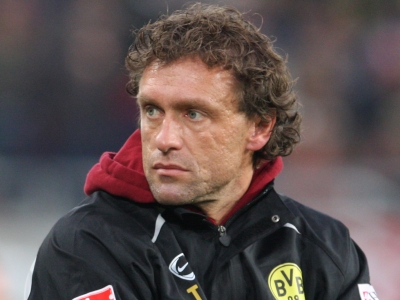 Thomas Doll stepped down from his job as coach of Borussia Dortmund yesterday. The 42 year old had just presided Dortmund's worst Bundesliga campaign in 20 years. Borussia finished in 13th place but grabbed the record for the worst defense. Our team leaked 62 goals in 34 games, making it nearly 2 goals a match. Doll had played four goalies and nearly twenty different defense formations this season. One of the arguments that was held against him. He however also reached the Cup Final which Borussia lost 2-1 after extra time to Bayern Munich on April, 19th.

Doll took over from unlucky Jürgen Röber in March 2007 and bravely fought relegation. The former international helped Dortmund to one of the most exciting Derby wins of all time when beating Schalke 2-0. Hammering the last nail into Schalke's coffin- Ending their dreams of winning the league last season. From then on however things slowly fell apart. Even without blaming Doll for everything that went wrong this season, putting an end to this relationship was the only conclusion to draw from yesterday's meeting with the board.

Said Watzke in the official club statement "What will stay behind is Thomas Doll's work in keeping us in the Bundesliga and qualifying for the UEFA Cup through reaching the German Cup final". A rumored farewell fee of 500.000€ will be transferred to Doll's account. In January he had just renewed his contract up until 2010.

It looks like the hunt for a new coach has already come to an end. According to Kicker editor Rainer Holzschuh former FSV Mainz 05 coach Jürgen Klopp joins Borussia Dortmund on a speculated three year contract. The former defender left the Mainsiders this Sunday after finishing their second-league campaign on 4th place - one behind the promotion spots. Fourty year old Klopp had been with Mainz for 18 years, seven of them as their coach. Klopp helped get Mainz promoted in 2004 and kept the little team in Bundesliga for three years.He is also one of the TV-experts on ZDF television. But will quit this job after Euro 08.

Other names linked to Borussia Dortmund right now include the likes of globetrotter Leo Benhakker, Christoph Daum, Michael Laudrup. But maybe it's also time for the first Scottish coach in Bundesliga. Dortmund legend Paul Lambert resigned as manager of Wycombe Wanderers, after leading them into the semis of FA League Cup only losing to Chelsea FC.