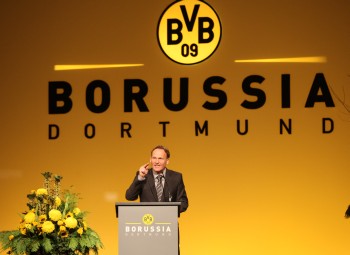 Like every autumn it is again time for all members and shareholders of Borussia Dortmund to come together and hear what the last year brought on good and bad news. Unlike the last years, most of the news were pretty good, so that both meetings turned out to be peaceful events.

On Sunday the registered society (e.V.) started as 632 members out of approximately 32.000 were present. Like every year the meeting started with congratulations for long-time BVB members. Alois Scheffler, chairman of the board of elders, was honoured for an astonishing 80 years membership. This part of the protocol was followed by reports of all of BVB's departments, like handball, table tennis and youth football. Especially a couple of wins over the blue-white rivals from Gelsenkirchen were celebrated! Wolfgang Springer was delighted that most of the youth teams are now able to use the new trainings complex in Dortmund-Brackel. 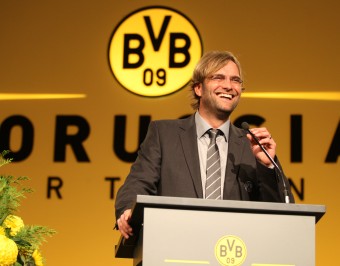 Before the elections started the team entered the hall and earned a warm welcome. Coach Jürgen Klopp gave a 15 minute speech and was again cheered.Hans-Joachim Watzke entered the podium and gave a short outlook of Tuesday's annual meeting of the company Borussia Dortmund. The club dramatically reduced debts and for the third time in a row made a profit - though not that big this year. Dr. Lunow, treasurer and in command of the new Borussia museum, gave a short report about the registered society financial activities and the new museum, which will be called Borusseum.

Then the elections and ballots started. President Reinhard Rauball's position was not out for reelection. Only the vice-president and the treasurer were. While Dr. Lunow was re-elected into his job as treasurer, Dr. Knauf passed on his job and so it needed a new candidate. Long-time Borussia Dortmund fan and supervisory board chairman Gerd Pieper was nominated and elected easily. 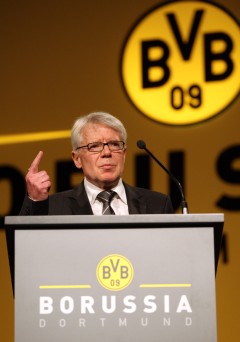 This was surely only the start-up for the main and most controversially discussed topic: the so called 50%+1-rule. This rule prohibits that any Bundesliga club sells more than 50% of the voting rights to an investor. Clubs like Hannover 96 are eager to bring this rule down - even if they need to go to court. As Borussia Dortmund's official and most of the supporters strongly oppose such a scenario, there was petition to prohibit any transactions like these. The ballot was very clear and so accepted. Another ballot was about separating the top jobs of the registered society and the company. This election was narrowly rejected. After 5 hours of several speeches, elections and ballot president Reinhard Rauball closed the meeting and opened the buffet consisting of pea soup and beer - like every year.

The annual meeting of the Borussia Dortmund company was even less spectacular. The turnover rose despite missing European cup matches. On the other hand we were missing extra effects like the world cup and so the profit went down from 10 mio to 1.1 mio Euros. The debts were dramatically lowered from more than 180 mio to 68 mio Euros. Most of the money was generated by a long-term contract with marketing company Sportfive. Looking at these numbers most of the shareholders seemed quite content. The only small downer was the again missing dividend. Watzke pointed out that we are not that profitable to splash the money around. And so also this second meeting ended without any turmoil.