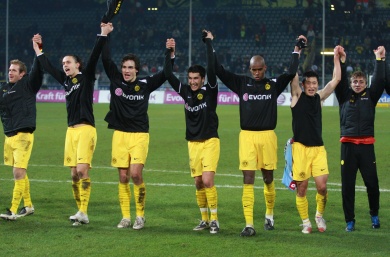 That was quite a lot of work - more than expected. Still Borussia Dortmund kept 3 points at home after beating bottom club Mönchengladbach 2-1. Even more notable as we were down 1 man for more than 50 minutes.

In front of a enourmous crowd of 79.700 spectators BVB coach Jürgen Klopp made only one change. Kuba replaced Felipe Santana. Though this was the only chane on the lineup sheet, nonetheless there were some tactical changes. Mats Hummels was drawn back to central defence. Tinga took his job and Kuba started in right midfield. Alexander Frei and Mohamed Zidan made up our offence. Guest coach Hans Meyer replaced Daems (suspended due to fifth booking), Alberman and Coulatti by Brouwers, Bradley and Matmour. He also modified tactics and fielded a flat-three that transformed into a flat-five when BVB had the ball.

And Borussia Dortmund started encouraged. The first ten minutes were cleared dominated by the black-yellows. In minute 3 BVB had a first free-kick at the edge of Gladbach's box, which was wasted anyway. It was followed by two corner kicks, that both found Mats Hummels head. Especially the second one was a nice chance but wide. When most of the spectators waited for total dominance and BVB's first goal, Mönchengladbach found back into the match. Some nice attacks over both wings pressed Dortmund back into their own half. Though Gladbach didn't created any chances they cut down BVB's game play. The black-yellows had any answer and operated with long, high passes - easy to defense for Gladbach. Half an hour was played when unneeded roughness was added. First Marko Marin got booked for a rude jump into Kuba then Hajnal got a yellow card for a unnecessary foul in midfield - a yellow card that should be of significance later in this first half. But before continuing with this story, BVB had another chance - more or less by accident. Subotic imprecise high ball was cleared by Gohouri by head. The deflected ball found Mohamed Zidan on the right side of the box. The Egyptian national didn't hesitate and fired a powerful volley shot. The ball rocketed direction left upper corner of Gladbach's goal and left keeper Heimeroth really no chance - 1-0 for Borussia Dortmund! Really nice and this could have been the offbeat to an easy win - wouldn't there have been Hajnal with a stupid action. A long pass into Gladbach's box, made Heimeroth leave his goal. The keeper clearly catched the ball before Hajnal was able to get it. Nonetheless the Hungarian playmaker didn't pull back but hit Heimeroth's left knee. An absolute unnecessary action that was "awarded" with a second booking! With this last downer for us and another two yellow cards for Kringe and Kuba referee Kircher send both teams into the cabins. 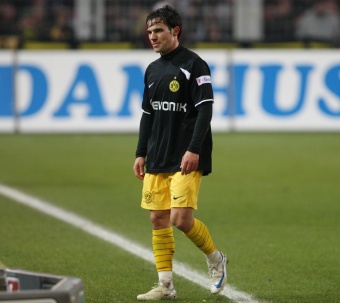 Second half
Jürgen Klopp reacted with fielding another midfielder and taking Frei off the pitch. Though that was not really amusing the ambitious Swiss striker but as Zidan is an excellent counter striker this change was understandable. As expected Gladbach started with much more drive than during the first half. They easily dominated midfield but still lacked real chances. Most of their attacks were easy to defend for BVB's young central defence. And just within Gladbach's attempts to be real threat for BVB's goalie, the black-yellows had an excellent answer. A counter-attack initiated by Zidan sent Kuba down the right wing. The ultra-fast Polish national paced into the box, left Roel Brouwers and passed the ball superbly to Sahin, who was waiting on the left side of the box. The young Turk used his strong left foot and scored easily from about 12 metres - 2-0 for Borussia Dortmund! Not really deserved during this period of the match, but that didn't matter for the supporters on the stands. By the way, we haven't mentioned that our keeper Roman Weidenfeller had four shoot-outs in row. And he did his best to keep this record alive. In minute 65 Matmour's high cut-in found Friend's head. Weidenfeller needed all his skills to clear this one! Though this was a nice approach Gladbach still lacked a coordinated offence game play. They had only few chances and most of those were just by accident. It took until minute 80 when a high cut-in was cleared by Tinga. Unfortunately the ball found van den Bergh waiting on the left corner of BVB's box. He didn't hesitated and took this one volley. He hit the ball perfectly and fired it into the upper right corner of Weidenfeller's goal - 2-1! This late goal turned the match into an exciting, nerve-wracking event. In reality Mönchengladbach was still not able to be of any threat for BVB and so the referee blew the final whistle after 92 minutes.

Summary
A hard fight that resulted in 3 damn needed points. It was surely not the easy win some of us had expected and in the end we were lucky that Gladbach wasn't able to capitalize from our red card. Anyway, we played a superb first leg of the season. 29 points is really a nice result and we even played nice football in most of the matches. Only Hoffenheim dominated us and deserved the three-pointer against us. In all of the other matches we at least on the same level. Good work, guys! 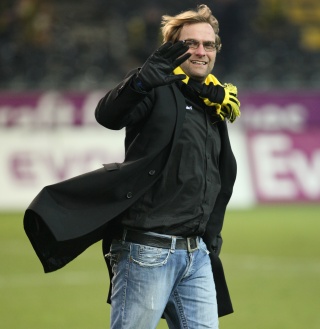 Statements
Jürgen Klopp: "That was a great fight and a great finsh to the year. We had a difficut period. The first booking for Hajnal was not justified at all, the second one was for sure. From there on it were 50 minutes, that needed a concentrated performance. Those few months that I am here in Dortmund were really intense and draining, but I am also really satisfied."

Hans Meyer: "We lost, but that isn't that seldom. Most of the match we played solid, but we can't buy anything for that. We got behind by a lucky shot when we more or less controlled the match. But also against only 10 men it was a tough match for us."